skip to main | skip to sidebar

The name shakuhachi means "1.8 foot", from its size. It is a compound of two words:

Thus, "shaku-hachi" means "one foot eight" (almost 55 centimeters), the standard length of a shakuhachi. Other shakuhachi vary in length from about 1.3 shaku up to 3.3 shaku. (The longer the shakuhachi, the lower its tuning.) Although the sizes differ, they are all still referred to generically as "shakuhachi". A shakuhachi showing its utaguchi (歌口, blowing edge) and inlay

A recorder player blows into a duct, a narrow wind-way over a block which is called a "fipple", and thus has limited pitch control. The shakuhachi player blows as one would blow across the top of an empty bottle (though the shakuhachi has a sharp edge to blow against) and has substantial pitch control. The five finger holes are tuned to a pentatonic scale with no half-tones, but the player can bend each pitch as much as a whole tone or more, using techniques called meri and kari, in which the blowing angle is adjusted to bend the pitch downward and upward, respectively. Pitches may also be lowered by shading or partially covering finger holes. Since most pitches can be achieved via several different fingering or blowing techniques on the shakuhachi, the timbre of each possibility is taken into account when composing or playing. The shakuhachi has a range of two full octaves (the lower is called otsu, the upper, kan) and a partial third octave (dai-kan). The different octaves are produced using subtle variations of breath and embouchure.

A 1.8 shakuhachi produces D4 (D above Middle C, 293.66Hz) as its fundamental - the lowest note it produces with all five finger holes covered, and a normal blowing angle. In contrast, a 2.4 shakuhachi has a fundamental of A3 (A below Middle C, 220Hz). As the length increases, the spacing of the finger holes also increases, stretching both fingers and technique. Longer flutes often have offset finger holes, and very long flutes are almost always custom made to suit individual players. Some honkyoku, in particular those of the Nezasaha (Kimpu-ryu) school are intended to be played on these longer flutes.

Much of the shakuhachi's subtlety (and player's skill) lies in its rich tone colouring, and the ability for its variation. Different fingerings, embouchures and amounts of meri can produce notes of the same pitch, but with subtle or dramatic differences in the tone colouring. The honkyoku pieces rely heavily on this aspect of the instrument to enhance their subtlety and depth.

Shakuhachi are usually made from the root end of a bamboo culm and are extremely versatile instruments. Holes can be covered partially (1/3 covered, 1/2, 2/3, etc.) and pitch varied subtly or substantially by changing the blowing angle. Professional players can produce virtually any pitch they wish from the instrument, and play a wide repertoire of original Zen music, ensemble music with koto, biwa and shamisen, folk music, jazz, and other modern pieces.

Due to the skill required, the time involved, and the range of quality in materials to craft bamboo shakuhachi, one can expect to pay from USD 300 to USD 5,000 for a new or used flute. Because each piece of bamboo is unique, shakuhachi cannot be mass-produced, and craftsmen must spend much time finding the correct bore shape for each individual flute to result in correct pitch over all notes. Specimens of extremely high quality, with valuable inlays, or of historical significance can fetch USD 10,000 or more. Plastic or PVC shakuhachi have some advantages over their traditional bamboo counterparts: they are light weight, extremely durable, nearly impervious to heat and cold, and typically cost less than USD 100. Shakuhachi made of wood are also available, typically costing less than bamboo but more than synthetic materials. Nearly all players, however, prefer bamboo, citing tonal qualities, aesthetics, and tradition.

Honkyoku, the "original music" of the shakuhachi, represents one of the major genres of traditional Japanese music. The name of the instrument is derived from an ancient system of measurement, shakuhachi being the corruption of i shaku ha sun which literally means 1.8 feet, the length of the classical flute. Instruments ranging in size from 1.3' to 2.4' are used in concert and flutes as long as 3.2', while less common, are also played.

Posted by Whistlehead at 9:29 AM

So Cool, now i also want to have a Shakuhachi. Thank you for this article it's an interesting read :) Keep up the great work 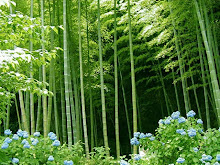 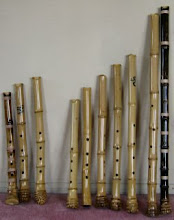